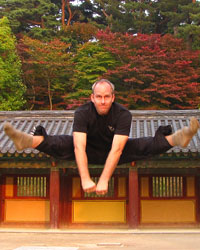 Master George Hoffmeister is a 6th Degree Black Belt in the Art of Soo Bahk Do Moo Duk Kwan, a traditional Korean style derived from Southern and Northern China and from ancient Korean Soo Bahk Kwon Bop. He is the owner and lead instructor at the Glendora Korean Karate Center (Edelweiss Soo Bahk Do). He has trained and promoted in Korea and won numerous national titles in both sparring and forms in Soo Bahk Do and in open tournaments. Writing Chinese calligraphy (Hanja/Kanji), reading, spending time with his wife Brenda and son Alex, and traveling, are his pass times. He is also a high school language teacher of French and German at Glendora High 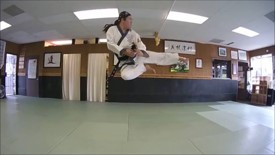 Francis Ka is a 3rd Degree Dan and Certified Instructor of Soo Bahk Do Moo Duk Kwan, a traditional Korean Martial Art. Has been training with Sa Bom Nim Hoffmeister at the Glendora Korean Karate Center (Edelweiss Soo Bahk Do) since 1997. He is specialized in improving students’ jumping ability and in teaching sparring drills. He has been a representative of Region 9 Sparring team numerous times and has won numerous national titles in both sparring and forms in Soo Bahk Do and open tournaments. He also speaks and writes in three different languages. During his spare time he teaches vocal/music classes at church. He is works as PIT Operator, Safety committee member, and ambassador at a world’s leading warehouse. 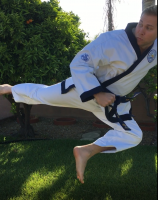 Daniel Plante is a 1st degree black belt and holds the Jyo Ko Certification in Soo Bahk Do Moo Duk Kwan. His favorite part about training in Soo Bahk Do is the martial discipline and dynamic workout. In his spare time he often goes hiking as well as go karting and racing in the SCCA’s autocross. He works as a Elevator Constructor and enjoys how his training provides good physical and mental challenges.

Bill McCusker is a 2nd degree black belt in Soo Bahk Do Moo Duk Kwan. His favorite part about training in Soo Bahk Do is it’s balanced approach to being both a martial discipline and an art. In his spare time he often goes hiking in the local national forests as well as camping. He works as a Software Engineer and enjoys how his training gets him away from his daily routine.

Mimi Reyes is a second degree blackbelt, teaching at Kindergarten Ranch School since 2003 and training Soo Bahk Do since 2005 with Sa Bom Nim Hoffmeister. Ms. Reyes started teaching Soo Bahk Do in 2006 as a green belt and since has attained JoKyo and KyoSa Certification.

Ms. Reyes enjoys Soo Bahk Do, teaching, working out, running, music, movies, art, drawing, a walk on the beach, spending time with the ones she loves, traveling, reading, swimming, and hiking.

Sign up to receive our FREE report
Building Your Child's Confidence 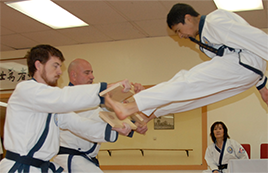